Please contact the Bridgend Tourism Association to confirm your attendance by Wednesday 5th February by email: enquiries@bridgendtourism.co.uk or by phone 01656 774361

More than 43,000 spectators lined the fairways of the revered Bridgend links in July to witness Bernhard Langer produce one of the stand-out performances in the history of senior golf to win the title for a second time, finishing 13 shots clear of 2010 Ryder Cup Captain Colin Montgomerie.

Four years on from Wales hosting the 2010 Ryder Cup at The Celtic Manor Resort, The Senior Open Championship once again showcased the country to a global audience, following an agreement for the country to host the Championship made between the Welsh Government, the European Senior Tour and The R&A.

As part of that agreement, which aimed to build on the legacy of The 2010 Ryder Cup, The Senior Open Championship will now go back to Royal Porthcawl in three years’ time, following next year’s Championship at Sunningdale Golf Club in England, and the 2016 edition at Carnoustie in Scotland.

Welsh Government, Deputy Minister for Culture, Sport and Tourism, Ken Skates, said: “I’m delighted with the confirmation that we’ll be welcoming The Senior Open Championship back to Wales and to Royal Porthcawl in 2017.

“This was the first Major Championship to be held in Wales and the successful hosting of the tournament, and confirmation of its return, reinforces Wales’s reputation as a world-class events destination and as a golf destination with big ambitions. We look forward to working with our partners to make The 2017 Senior Open Championship another success.”

“We are therefore delighted to confirm that The Senior Open Championship will be returning to Royal Porthcawl in 2017, and hopefully the Welsh public will embrace it just like they did this summer.”

Prior to hosting The Senior Open Championship, Royal Porthcawl hosted the Coral Welsh Classic on The European Tour three times between 1980-1982, and the Wales Senior Open in 2009, 2010 and 2013, as well as the 1995 Walker Cup, featuring Tiger Woods, when Great Britain and Ireland beat the USA by 14-10. Royal Porthcawl will also host the Amateur Championship in 2016.

We’ll be on the road end of November for a series of road shows to share with you our plans for marketing Wales in 2015. We’ll be joined by colleagues from Visit Britain to explain about the work they do on PR and how this links in to our own PR teams in Visit Wales. Spaces are limited at each venue so please book your place by October 31 2014.

We’re pleased to announce that as of today (1st October 2014)  our new regional teams are officially on board and part of the Visit Wales team.  Many will be familiar faces and bring valuable wealth of experience and skills to these roles as well as in-depth knowledge of their local areas and stakeholders – absolutely essential to the success of the our new regional model.  Here are your contacts in the regions:

Until individual email addresses have been finalised for our new members of staff, please use the following  email as point of contact:

Bridgend Tourism Association Chairman, Karl Schmidtke, has called on local businesses to support the Senior Open Golf Championship, to be held at the Royal Porthcawl Golf Club this summer.

He says the event will showcase Porthcawl and the surrounding area to the world. And he’s keen to encourage support for the first ever ‘Major’ tournament to be held in Wales.

He said:”The Senior Open Golf Championship will turn the spotlight on Porthcawl, with a potential £3 to £4million spinoff in terms of additional local spend. The organisers are very keen to involve the local community and to ensure that local businesses benefit as much as possible.

“They are actively encouraging a positive integration of local businesses and cite examples of how the event has benefitted other areas.  When it was held in Portrush, Northern Ireland, golfing personalities involved themselves in community life and tried to find a common bond.

“It’s incredibly important that businesses buy into this exciting Major Championship as it will raise our profile in an international shop window. What’s more, if we get this right then there is the opportunity to host additional Championships twice more before 2014, which will put us in a good position to land the Open Championship”

Karl Schmidtke emphasised that the event, to be held between 24 and 27 July this year would be televised across the world, 18 hours live coverage over the four days. Accommodation is needed for players, their families, support staff, those organising and erecting the tented village, and media, as well as huge demand for meals before, during, and after the event.

History of the Royal Porthcawl 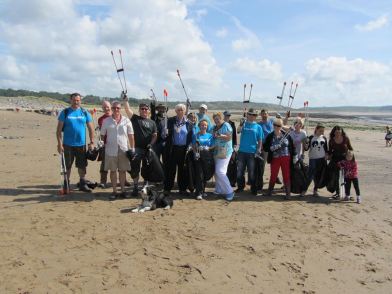 Who would have thought it?

Tourism brings in £282 million a year to the borough of Bridgend, with latest Steam figures showing that the visitor numbers totaled 3.5 million in 2012.

Bridgend Tourism Association Chairman Karl Schmidtke stressed the importance of the council’s tourism team in bringing jobs and prosperity to the borough. He said the dedicated staff worked hard to raise the profile of the area and to increase the quality and quantity of the product.

“The council’s tourism team has worked well with us as BTA and has clearly worked hard to get the word out there about all that we have to offer here in Bridgend.”

The council’s tourism team has played a pivotal role in developing increased footfall and revenue.  The statistics show that in the same year tourists stayed for 5.2 million days, bringing direct employment to more than three thousand people and indirectly employing 1,213 individuals.

The team’s work has attracted 143,802 unique users to the BridgendBites.com website since March 2013 and has distributed 70,000 brochures across the county and to the rest of the UK.

The Countryside and Tourism Unit has worked hard to develop tourism in the borough and in 2012/2013 year provided support and advice to over 75 tourism businesses. This ranged from planning, grading, business improvements, tourism signage and grant advice.

The unit awarded up to £75,000 grant to tourism businesses from the Local Investment Fund, securing £350,368 in match funding. It also provided support and assistance for the opening of 3 new accommodation operators and for two attractions

< Previous Next >
+ Add your own event Eventbrite